Sign Up
Log In
Purchase a Subscription
You are the owner of this article.
Edit Article Add New Article
You have permission to edit this article.
Edit
Home
News
Calendar
Lifestyles
Business
Justice
e-Edition
Multimedia
Support TCV
More
Business Directory
Donate
Share This

Football games across Wichita that were once jam-packed with young players and the sounds of cheers will return Saturday with a new twist, but the anticipation for little league football has remained high. As little leaguers and coaches gear up for their first game back in the Greater Wichita Junior Football League, let's take a look ahead at the upcoming schedule for Week 1. 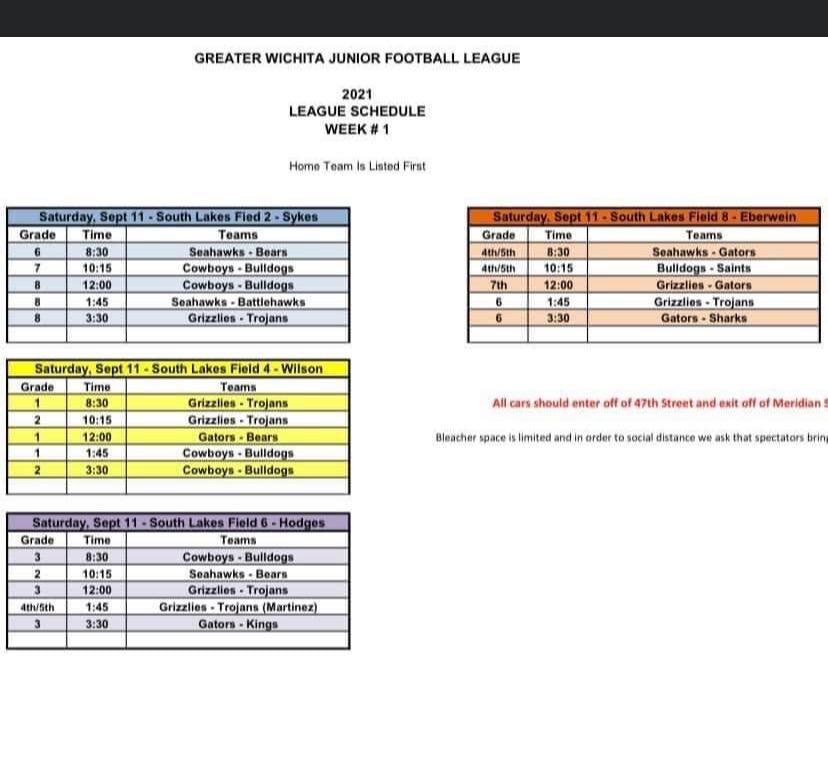 One of Wichita's oldest rivalries will be renewed Saturday when the Bulldogs face off against the nationally-ranked Cowboys in their routine Week 1 matchup.

"Bulldogs vs. Cowboys is the biggest football rivalry in the city; being able to be a part of something with that kind of rich tradition and coach in an atmosphere like that means a lot to me, the boys, and the community," said Coach AJ of the Cowboys.

Coach AJ will lead his 8th-grade boys' team on their final ride together as they look to bounce back after last year's national championship loss. The 8th-grade team has spent years together, boosting a phenomenal record of 115 wins with only six losses.

“The Cowboys are really the cream of the crop as far as football is concerned around here. We probably have five out of the top eight teams in each grade. Organization wise we do have a lot of success. So we want to continue to do that, especially if we want to win the city,” said Coach AJ.

However, the Bulldogs are unfazed by the Cowboys' success, and all of the Bulldogs age groups are excited about the opportunity to play against their rival. Coach Pop of the Bulldogs is looking forward to his team's first games, but most importantly, he is hopeful for a safe season.

"It's been a big-time rivalry that has been going on for about 15-20 years now, and playing your rival the first week is dope, but my biggest expectation and hope for this season is that we have a full season and everybody can remain healthy," said Coach Pop.

With the first weekend of the 2021 season approaching, like most things during the pandemic, some changes are being expected to protect the health and safety of everyone.

Wyndell Knox, director of the Seahawks, took matters into his own hands this offseason and implemented a weekly testing program for the kids.

"Covid struck everybody hard last year, and we know parents were skeptical about bringing their kids back to sports, so we wanted to make sure we made the right decisions in making sure our kids were safe," said Knox.

One of the biggest changes this year will be no home-court advantage as all-league play will take place at the South Lakes Sports Complex. With 16 full-size fields, the league wanted to provide ample space for teams to warm up and for fans to distance themselves socially.

Barry Sander’s field at McAdams and Grove Park fields will be vacant opening weekend for the first time and some coaches feel their respective fields have a lot of tradition, and very few if any are in favor of holding all of the games at the South Lakes Complex.

Regardless of the field, When not actively playing or practicing, players are urged to wear masks; coaches are required to wear masks at all times during games and practices, and fans are asked to wear masks when social distancing is unavoidable.