A coalition of civil rights organizations is calling on Kansas City Mayor Quinton Lucas to formally reject the presence of federal agents in the city after 200 agents arrived last week as part of Operation LeGend, an initiative aimed at tackling violent crime.

Legacy organizations such as the NAACP, the Urban League and the Southern Christian Leadership Conference joined other social justice groups like Black Rainbow, One Struggle KC, KC Tenants, the Sunrise Movement and Showing up for Racial Justice (SURJ) in signing an open letter to Lucas, saying that by inviting federal agents into Kansas City, Lucas opened the door to “undue civilian terror, functional martial law, and the obstruction of basic civil liberties.”

Ray Billis, who works with Black Rainbow, says the mere presence of federal agents has a negative effect on Black communities, which have historically been over-policed.

The groups are also calling for the mayor to redirect half of the Kansas City Police Department’s budget to housing, healthcare and education programs.

Billis says as the KCPD budget has grown steadily over the last five years, so has violent crime.

“It baffles me that that we continue to invest resources into this broken police institution that has no statistical proof that is does actually reduce crime rates,” Billis told KCUR. “And we have this other data and statistics that say increasing education does reduce crime rates.”

The letter also accuses Lucas of being a hypocrite, by first welcoming the federal aid and then signing onto a letter with several other mayors who have condemned the federal presence in their cities.

Operation LeGend has been controversial since it was first announced earlier this month. (It is named after 4-year-old LeGend Taliferro, who was shot and killed in Kansas City, Missouri, on June 29, 2020.)

While some advocates say the city needs all the help it can get to reduce violent crime, others have accused the operation of “militarizing” the community.

Lucas has said he welcomed federal assistance to help clear homicides but has also expressed grave concerns about the operation. His office did not immediately provide a statement regarding the letter, but Lucas has said repeatedly he does not support defunding the police.

Lucas told KCUR on July 27 that he hoped the federal assistance would come in the form of data specialists and ballistic experts to help investigators and expressed skepticism after the initial arrest was for the illegal possession of a firearm — not directly tied to homicides. The U.S. Attorney announced Monday that they assisted Kansas City police in the arrest of a murder suspect who was charged over the weekend. 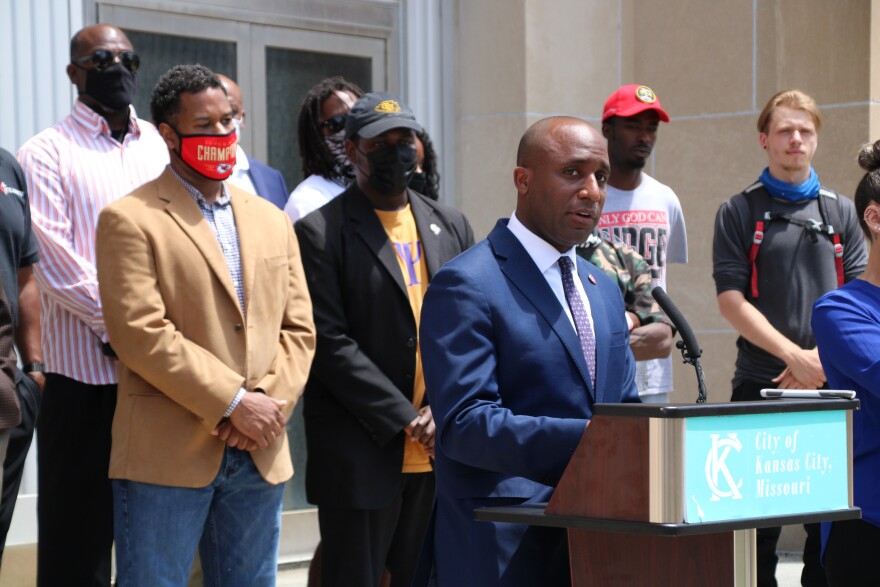 “One concern that, of course, I have is that given that this has now gotten significant political attention, there will be a goal to put points on the board and that the end of this 60-day period have a number of arrests and fugitives apprehended,” Lucas said.

The operation has generated international attention, particularly after the White House included Chicago and Albuquerque.

In an interview July 28 with the BBC, Lucas sought to explain the difference between Operation LeGend and the civil unrest in Portland where protesters and federal agents have engaged in combative encounters for weeks during demonstrations.

“I do understand Operation LeGend and the operations in the Pacific Northwest are different things but they have the same somewhat Trojan horse type concern,” Lucas said. “How do we know that we can trust this administration long-term?”

Lucas has also faced questioning over when he first learned about the influx of federal agents.

While Lucas initially said he learned of the operation on Twitter the day it was announced by the White House, a Kansas City Star report revealed a letter was sent to the Justice Department from his office supporting the concept of federal assistance the day before.

Lucas explained to KCUR that staffers in his office knew about the federal government’s plan to send agents to Kansas City to help deal with a surge of violent crime, but neither they — nor he — knew the scope of the operation.

Further adding to the confusion over the role of federal agents in Kansas City, U.S. Attorney General William Barr last week stated there had been more than 200 arrests under Operation LeGend.

“Operation LeGend appears to be little more than a repackaging of existing operations in these cities. So why all the drama,” Nadler said. “Why join the president, the White House, to announce a bold new operation that appears to be neither bold, nor new?”

Nadler pressed on, saying many Americans are suspicious of Barr’s motives, and he wondered aloud whether the federal surge of law enforcement was “to help with the President’s reelection efforts.”

“The President has made clear that he wants conflict between protesters and police to be a central claim, a central theme of this campaign,” Nadler said.

Barr defended his agency’s actions, saying Operation Relentless Pursuit was stopped by the pandemic, but serious violent crime continued in these cities and mayors requested help.

“We saw violent crime continuing to rise and a lot of that was triggered after the death of George Floyd,” Barr said. “So we did reboot the program after COVID started breaking and we could commit the law enforcement resources to actually accomplish the mission, which is to reduce violent crime.”

What big activity will you be doing this summer, given the pandemic situation?

Sorry, there are no recent results for popular videos.

Sorry, there are no recent results for popular commented articles.

You And The Law - A Special Section of The Community Voice

Success! An email has been sent to with a link to confirm list signup.

Error! There was an error processing your request.